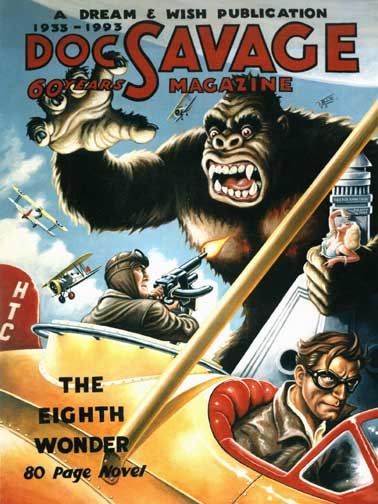 I have returned from the jungled mountains of Brazil, renewed, a silly smile on my face, and ready to get back to work on the Doc Wilde adventures. I have a lot to write about, and will get to it as I can, but I wanted to share this cool news from friend of the Wildes and fellow pulpster Will Murray:

Eighty years ago in February, 1933 the Street & Smith company released the first issue of Doc Savage Magazine, introducing one of the most popular and influential pulp superheroes ever to hit the American scene. Doc Savage was the greatest adventure and scientist of his era, and while his magazine ended in 1949, he influenced the creators of Superman, Batman, Star Trek, The Man from UNCLE and the Marvel Universe—to name only a few.

While that first issue of Doc Savage was fresh on Depression newsstands,  Universal Studios released one of the most important fantasy films of all time. Everyone  knows the story of how King Kong was discovered on Skull Island and hauled back to New York in chains, only to perish tragically atop the world’s tallest  skyscraper, the Empire State Building.

As it happened, that was where Doc Savage had his world headquarters. For decades, fans have wondered: Where was Doc the day Kong fell? END_OF_DOCUMENT_TOKEN_TO_BE_REPLACED