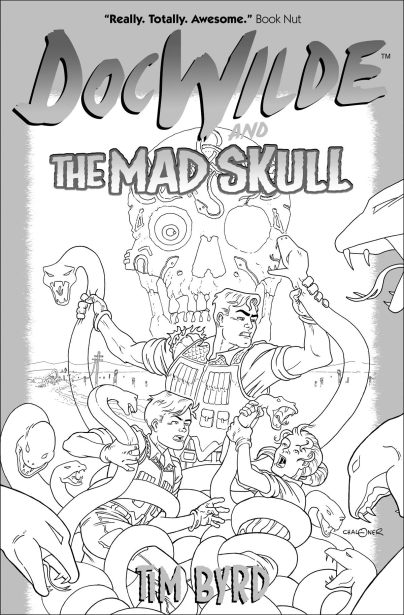 Okay, the bad news first: Doc Wilde and The Mad Skull, which was targeted for release right about now, ain’t ready yet.

There have been delays at both ends, writer and artist. I’m not satisfied with the manuscript as it stands and have been trying to wrestle it into its proper form while also dealing with matters related to importing my lovely lass Nydia and her son from Brazil and installing them in my cave, getting married, and preparing all the paperwork for immigration in order to make Nyd legal so that Donald Trump doesn’t spaz out about it on Twitter and sic the DHS on us. Meanwhile, Gary Chaloner has had a lot on his plate that has slowed his progress on the art and book design.

But, we’re still at it, and other Wilde adventures are in the works. For one, I have a chunk of the third book, Doc Wilde and The Dance of the Werewolf, already written and Gary will be getting a jump on the cover design for that. For another, he is about to begin publishing a quarterly comic magazine, Adventure Illus., which will focus on his comic book work and characters but which will also feature serialized original Doc Wilde stories. More news on that as it happens.

Now, I’m gonna relax and enjoy my family the rest of the year, then really get cranking again in January to get all this Wilde goodness out to the folks raring to see it.

Happy Holidays to you all. Stay Wilde!