Today, I get to share some huge news with you about the future of Doc Wilde.

As you may know, the first book in the series, Doc Wilde and The Frogs of Doom, was published by G.P. Putnam’s Sons in 2009. It was very well reviewed and sold well enough that Putnam contracted me for two more books toward building a regular series. The safe (and possibly sane) course of action would have been to stick with Putnam and all the benefits of publishing with a big house. My experience with Putnam was largely positive, and I’d beaten the odds by landing with them in the first place. But…

But I wasn’t satisfied with the book Putnam put out or their support of it. There were some editorial dictates I allowed myself to be persuaded to follow that I felt weakened the story, the book was pigeonholed by the publisher as a middle-grade work rather than a tale for all ages as I intended, and the publisher put very little effort or money into promotion (this is, alas, mostly par for the course these days).

Additionally, I was simply more ambitious about the Wildes than Putnam was, and had wanted the books to be fully illustrated. With this in mind, before I’d even finished writing the book I’d sought and found the perfect artist for it, a hellaciously talented Aussie named Gary Chaloner. Gary read what I’d written to that point and fell in love with the characters and agreed to join the Wilde team. While I finished the book, he put a lot of time and work into getting the characters just right, and I loved his take on my heros. A fellow pulp-fan, Gary understood the Wildes in his bones, and his images were dynamic and clever and made my story look good. The picture atop this post is one of his.

When they bought Frogs of Doom, Putnam disregarded all the work Gary had already done and my aspiration for nicely illustrated volumes. The book they put out replaced illustrations with goofy typographical effects in the text which made it look expressly aimed only at younger readers, and while the painted cover was nice, it did not capture my characters as I saw them and I never got so much as an email consultation with the artist. 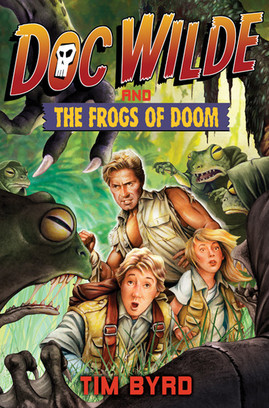 Now, that’s not unusual, not many authors actually have much say in the covers that get stuck on their books. But since I’d been through months of collaborative effort with my artist of choice, who had labored meticulously to honor my vision, I was naturally even more dissatisfied by the outcome.

So, inspired by the independent publishing revolution, I decided to take matters into my own hands. I managed to work some loophole sorcery and not only wriggled out of the contract for the next two books but regained full rights to Doc Wilde and The Frogs of Doom. I brought Gary back on board and we set out to create the books I’d wanted all along. After lots of work and some delays, in 2013 we rereleased the first book in a gorgeous new edition that was not only packed with great Chaloner artwork but also featured my preferred, extended “Author’s Cut” of the story.

Working with Gary on this book was the most enjoyable creative collaboration I’ve ever had, and the resulting volume is a thing of beauty. Unfortunately, just after its publication, Gary was forced to resign from the series due to scheduling concerns. This was a crushing blow, but I rallied and hired a new artist, Tess Fowler, which was a terrible mistake. She took my money and dragged ass for months without producing anything but a few rough sketches then, as we approached the originally agreed upon release window, threw a neurotic fit and ceased all communications. She kept the cash. I later found out that I’m not the only victim of this sort of behavior on her part.

Being ripped off by Tess Fowler didn’t just cost me money, it cost me all the months she was allegedly working on the next book. And it triggered my depression, which I’ve battled for years, making further progress impossible for many months more. All the creative and logistical issues of creating these books were further exacerbated by the anxiety of my trust betrayed and depression’s leaden shroud. I entered a period of convalescence, realizing I needed to get a handle on my daily life again before I could even begin to think about getting back to work on the Wilde books.

Well, the time has come to get back on that buckin’ bronco. The Doc Wilde series is finally continuing. And the really big news is: Gary Chaloner is back as the official Wilde artist!

Gary is still very busy, so we’re taking it at a slower pace than originally intended, but it’s worth it to do these books right. The new release schedule will be a new Doc Wilde book every year. This will allow him to fit Wilde work into his schedule without overwhelming him, and it will allow me to alternate Doc Wilde books with other writing projects.

We plan to release the second book, Doc Wilde and The Mad Skull, by Christmas 2016, with a yearly release around the same time each year thereafter. And we hope you’ll join us on all our adventures for years to come…

7 comments on “The Once & Future Wilde: GREAT News About The Doc Wilde Series!”