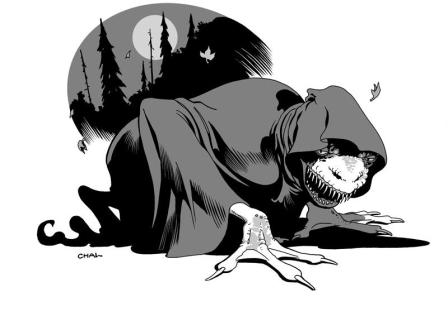 Its structure was an odd mix of gothic castle, log cabin, and Art Deco glass and steel, with an enormous white ash tree rising through its architectural core like Yggdrasil, the sacred World Tree of Norse myth. It sat on a high wooded hill eighteen miles outside the city limits of New York, a mighty guardian watching over the land.

Doctor Spartacus Wilde had designed Lyonesse, and oversaw its construction. He took its name from Arthurian legend: Lyonesse was the mystic island of Sir Tristan’s birth, a sunken land lost beneath the waves somewhere off the coast of Cornwall. Now, this modern Lyonesse was internationally renowned as the fantastic home and headquarters of the world’s greatest adventurer.

Half a mile from the hill on which the manor stood, a faint dirt track branched off the road into deep woods, ending at a well-camouflaged cave which penetrated deep into the bedrock beneath the rugged hillscape. This passage led to a spectacular underground bunker in which Doc Wilde stored his amazing assortment of vehicles.

As early evening twilight painted the hills above, an elegant jet-black automobile with three headlights zoomed from the bunker, eerily silent but for the crunch of tires on the gravelly cave floor. This muscular rocket of a car was a 1948 Tucker Torpedo. Only 51 of them had ever been made, and only 48 remained in existence. Some were in museums. Some were with wealthy collectors. They were virtually impossible to acquire.

The Tucker accelerated swiftly. A titanium wall loomed in its path, but the vehicle did not slow. Seconds before impact, the wall snapped open, locking shut again after the car was through. Every hundred yards another such gate barred the way, but allowed the Tucker to pass. These indestructible gates were just one of the many security measures protecting Lyonesse.

The unusual automobile shot from the cave onto the dirt track through the forest.

Doc Wilde had made some modifications to the three Tucker Torpedoes so they would be truly adventure-worthy. Their steel bodies were reinforced with a spray-on armor coating, the windows were unbreakable glass, and the tires made of rupture-proof polymer gels. The old gasoline engines were replaced with solar/hydrogen engines of Doc’s own invention, eliminating all polluting emissions. And running boards had been added along the sides.

When the weather was nice (and sometimes when it wasn’t, if time was short), Doc liked to ride outside the car on the running board. In times of emergency, this served the additional purpose of making Doc visible to law enforcement officials, who knew that if Doc Wilde was breaking traffic laws, it had to be for very good reason, so they would try to clear the way and offer any assistance he might require.

The weather was nice now, and Doc was out on the driver’s side running board, the wind blasting through his hair, his mighty arms holding tight. He wore a white safari shirt with epaulets on the shoulders, khaki cargo pants, and leather boots. Over his shirt he wore his field vest, brown and full of pockets holding numerous useful tools and gizmos he always took with him on his travels.

Brian and Wren rode in the Tucker’s backseat, wearing clothes identical to their dad’s. The Wildes called these outfits their “danger clothes.”

Behind the wheel was Doc’s driver and pilot, an Irishman named Declan mac Coul. Declan’s hair and beard were shaggy red, and while he was just a few inches taller than 5 feet, he weighed as much as Doc. He was like a short bear and all muscle. There were many mysteries about Declan mac Coul, but one thing they knew for sure was that he could always be counted on completely.

Next to Declan sat Phineas Bartlett in a dapper suit and derby hat, holding a cane with an ornate eagle’s head handle of purest silver.

Spraying dust, the Tucker veered from the dirt track onto the main road into town. Bartlett scowled at Declan. “Slow down now, you misbegotten ape.”

“Funny you callin’ me an ape, all natty in that monkey suit,” Declan replied. But he did slow to the speed limit, as they were no longer on Doc’s private land.

When Declan and Bartlett addressed one another, the two men’s voices oozed disgust and dislike. But actually, they were the greatest of friends.

Wren interrupted their sparring. “Declan? Bartlett? Do either of you know what Ophrys means?”

Brian shot her a look. The little trickster hadn’t forgotten their squabble.

Bartlett chuckled. “You’ll need to wait till Declan learns English before you start tormenting him with Ancient Greek. But Ophrys means ‘eyebrow,’ if I recall correctly,” which he did. Phineas Bartlett recalled everything correctly; he had an eidetic memory (often called a “photographic memory”), and had total recall of everything he’d ever read.

Declan snorted. “You would know that.”

Bartlett smiled. “The benefits of a high-brow education.”

Wren grinned at Brian even more. He scowled and tried to ignore her.

Bartlett gazed benignly at Declan. “Aristotle tells us ‘Educated men are as much superior to uneducated men as the living are to the dead.’”

Bartlett was familiar with lots of quotations.

“Well,” Declan said, “I reckon that means I’m superior to Aristotle, me bein’ alive and him bein’ dead. So why should I listen to him?”

Doc Wilde was no longer on the running board.

Declan slammed on the brakes, the Tucker’s tires skidding asphalt in a long screech. “DOC?” he shouted out the open window.

There was no reply.

He and Bartlett unsnapped their seat belts and sprang from the car, scanning the empty gloom behind them. Wren and Brian scrambled out the rear doors.

“I don’t see him,” Brian said. His heart pounding, he clawed at a pocket on his vest and pulled out his communicator.

His father did not reply. Where was he?

“Get in the car,” Declan mac Coul ordered. “We’ll go back and find him.”

Everyone jumped back into their seats, slamming doors.

Bartlett and Declan whirled to face Brian as he responded.

His father’s voice replied: “I’m about a mile back along the road.”

Wren had her communicator out too. “Are you okay?” she asked.

Declan spun the Tucker Torpedo and rocketed back the way they had come. Soon, the beams of the car’s three head-lamps washed over Doctor Spartacus Wilde, who stood on the right side of the road. He raised his hand in a wave, his golden eyes glittering as they caught the light.

He was unharmed, though the right sleeve of his shirt had been ripped. It hung raggedly between his shoulder and the cuff still around his wrist, revealing the sleek muscles of his arm.

Everyone scrambled from the car and gathered before him.

A few minutes ago:

Doc Wilde grinned, the brisk wash of wind around the Tucker smoothing his hair back so that it looked like a golden skullcap. His clothes rippled in the wind, his muscles bulging as he held on.

Through Declan’s open window, Doc could hear the muted sounds of conversation, though the words were unclear. From the sharpness in Declan’s and Bartlett’s voices, he judged they were arguing. But then, if those two were within speaking distance, they were usually bedeviling each other.

The twilight was fading from navy blue to black as night fell. Trees along the roadside swayed gently in a breeze. The car was so quiet, and his hearing so keen, that even with the wind from the Tucker’s speed roaring around him he could hear crickets and frogs singing their evening songs.

Ahead, to the right, something moved in the shadows among the trees. Doc tried to make it out, but the Tucker reached the spot quickly. As he stared across the car’s roof into the shadows, one shadow detached itself and leaped over the car, so fast it took him off guard, which was not an easy thing to do.

The dark shape crashed into him, clutching at his shoulders, its weight knocking him from the running board. Doc’s body was still traveling at 65 miles per hour as he fell toward the hard asphalt.

In mid-fall, Doc Wilde grabbed the shape with one-hand, wrenching its mass off of him. He felt its hand (or claw?) grasp and rip his sleeve as it fell away in a different direction.

Doc tucked his chin and pulled himself into a tight ball, shifting his weight a fraction of a second before impact so that he’d strike the ground at a better angle. He hit the road in a ball, spinning madly, and rolled as smoothly as would be possible for a human to roll under such conditions.

As the Tucker sped away, Doc’s roll ended in the grass by the roadside. As he stood, his head reeled with brain-wracking dizziness. Using a mind technique learned from a ninja monk in Northern Japan who would somersault for miles down forested mountainsides, Doc cleared his senses. He dropped into a defensive stance and looked for his attacker.

About forty feet back, it was a shadowy lump in the grass. Staggering, it heaved itself to its feet. Doc’s eyes couldn’t make out its exact shape and he realized it was wearing a cloak or loose robe.

He charged it just as he heard Brian’s voice come over his communicator.

The shape turned toward him, then leaped into the woods. The leap carried it at least thirty feet. Doc tried to catch up, but the shape leaped again into the darkness, then again, and it was gone.

All Doc had seen was the dark shapelessness of its cloaked form, and when it looked at him, huge bulging round yellow eyes…

(Excerpted from my novel, Doc Wilde and The Frogs of Doom)

I’ll return next Wednesday with the letter G. I hope you’ll stop by. I’m a writer and I post about a wide variety of non-alphabet-specific topics. Feel free to comment under my posts. If you want to subscribe to the blog, there’s a button in the sidebar.

Also, feel free try to check out my adventure novel Doc Wilde and The Frogs of Doom. It’s been very well reviewed (KIRKUS REVIEWS: “Written in fast-paced, intelligent prose laced with humor and literary allusions ranging from Dante to Dr. Seuss, the story has all of the fun of old-fashioned pulp adventures.”) and is great for action-adventure lovers of all ages. 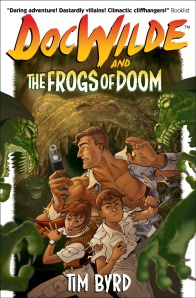