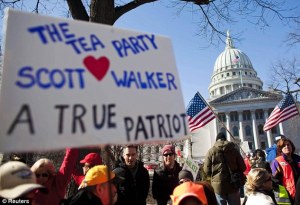 The following comes to you through a chain of association I hope will continue. I got it from Krista Smiling Wolf Hill, who got it from the blog of Al Stefanelli, who got it from his friend Joe Markey. It originated with someone posting in an online forum under the screen name “yeahIknow5.” I hope you’ll read it and pass it on in turn.

Reading it, I felt that it might well have been written about my own father, or any number of other folks I know who have locked-down minds and are easy prey for the authoritarian puppeteers of our world.

“You should read “What’s the Matter with Kansas” & “Deer Hunting With Jesus”. Both are great takes on a working class, anti-intellectual, redneck culture that has been convinced to consistently vote against their own best interests. I listen to my own father, who has been the victim of layoffs from corporate merger after merger, who’s had his retirement fucked, who’s lost money on wall street – he’s done everything he was ‘supposed’ to do. He joined the military, went to college, had 2 kids, bought the house, invested & saved his money, worked his fucking ass off all his life & he still has squat to show for it. Now as a man well into his 60s he’s feeling the wrath of age discrimination, he’s finding his skills becoming outdated & his pay & benefits today (for the last 10 years) are lower than what they’ve been in the last 30 for him. Living the american life he finds his health failing as he’s a lifetime smoker with a growing waistline.

He’s the prototypical uncultured, red-blooded american male. He slathers his streak in ketchup, votes conservatives down the line, and wants the good old days before the women, blacks and fags took over. He’s a flag waver, supports his troops, and fends for himself. He’s always bitching about how much money corporations have to spend bc of regulation & about how the upper class need a tax cut. Nothing in the world makes him angrier than “socialism” & the so-called welfare state. Working people getting needed services bothers him tremendously because a few extreme token examples get painted as degenerate leeches by the likes of AM Radio & Fox News. ANd then he’ll turn right around & support corporate subsidy for just about anything from corn to oil – b/c it “stimulates jobs” and it “trickles down”.

He refuses to recognize that we as a nation spend more money at the beckoning of corporate America than we even begin to touch what we spend on our own citizenry through what he claims is “welfare” or infrastructure. He’s a working class guy who’s been fucked by the system all his life. He still puts his suit on with a kind of sad pride, every day, & goes to work downtown to phone-monkey job nowadays. He’s doing a job any body could do but he likes to pretend all his education & experience has gotten him somewhere. He’s deluded about what America’s exceptional way of life has brought him personally as he is deluded about what the world is like at large. So he denies global warming, blames the unions, blames teachers & other government workers, blames regulation, blames the EPA & the FDA, blames those struggling to make it in this world, blames the blacks, blames the immigrants, blames everyone & anyone but those at the top.

He’d rather blame fellow working people trying to grab a piece of the pie, rather than blame the crooks who deprive us all. Because somehow – be it by gender identity, racial identity, national identity, he thinks his class, his type belongs at the top. He’s the top dog! But he’s not. He’s a nigger, i’m a nigger, muslims are niggers and mexicans are niggers, teachers and steel workers, and farmers too. To people like the Koch Brothers, we’re all niggers and my dad can’t see that. This is an us vs them game and people like my father are fucking deluded as to what side they’re on or can be on one day. Somewhere deep down inside, he admires those at the top – he wants to be them & even though he knows he’ll never be one of them, he likes to pretend.

He goes to his Applebee’s, Red Lobster & Outback & bitches about all the blacks there. I think this is important to note – it’s indicative of his whole perspective. He is the same CLASS of people as these folks, he’s spending roughly the same amount on dinner as them, but thinks things are going to hell because they are there. He doesn’t get that he IS THEM. He’s the same fucking class, in the same fucking boat. He’s got relatively the same education level, roughly the same pay checks, living roughly the same way of life. But he’s been convinced to fight, to hate, to dislike his own class of people & to admire & defend the class that basically owns & controls his life & all our lives. He has been perfectly trained to rail against the ‘other’.

Against feminists, environmentalists, labor movements, racial minorities, immigrants, public sector workers, union members. These people aren’t HIS brothers & sisters – they are his enemy. He’s so busy hating “otherness” that he doesn’t realize he is them – and we’re all getting fucked by the same small group of people at the top. This is the same thing as him blaming unions & the welfare state. He has been indoctrinated through the years to fight amongst, to disagree with, to blame, & sometimes to outright hate people in the same boat as him. Not only kiss the ass of, but actively defend & fight on behalf of those who would take everything away from him, his wife & his family if they could make a buck on it – because he believes in an American dream & a way of life that simply doesn’t exist. He talks of freedom of those who have all the capital, but he doesn’t worry about his own freedom. He doesn’t worry about the freedom of his neighbors.

All he see’s as those liberal that take away rich people’s money are the same people telling him where he can & cannot smoke and that he should put his seatbelt on – so liberals must “hate freedom!”. Those damned reading elitist liberal communists! He has been convinced, as have many Americans – to hate their own & to defend their masters. To squabble over our petty & even cosmetic differences, rather than to unite on our common interests to fight for proper pay, benefits, rights as a consumer & as a worker, & for a clean environment. This is what happens when you have a class of people who were never taught to think for themselves, who act like reading is for fags, who are more willing to listen to hot heads like Beck & Limbaugh than to read any kind of political theorists, scientists, or economists.

This is what happens when you close your mind & you become one who’s always looking for that “other” to hate & to blame for your problems rather than to look at yourself or open your eyes to the bigger picture. People like my dad are willing to accept AM radio, Fox News talk shows, & even Fwd chain emails as official sources, & then single-handedly ignore any material the talking heads on these shows didn’t point him to. Because you can’t trust anyone but them! The ability to critically think, verify, discern the credibility of sources, to do the damned research yourself, is completely lost on these folks. That’s what these fucking Tea Party & GOP talking heads hope for. They hope to god that their lies they spew get echoed in the public sphere so often that it becomes reality. That people are too dumb or too lazy to verify what they spout.

This makes it so that people who are trying to get real shit done have to waste our time correcting mis-truths & disinformation just to garnish the slightest bit of public support to make progress anywhere. People don’t realize how dangerous this shit is. Right now the economy is & had been in the shitter. People are scared. People have lost their jobs & they’re angry. They have organized & mobilized into this populist “tea party”. They even think it’s a real grassroots org & dismissing the fact that they’re being led by billionaires & a corporate media. These are the angry masses that will eat up any scapegoat that their “leaders” feed them.

We’ve seen this in history before. I’m not trying to evoke Godwins Law or anything but i see a lot of correlations between the right-wing disenfranchised populist uprising here in America & a lot of what people experience in Wiemar Germany. There was a lot of angry people, scared about the loss of their jobs & an economy in bad shape. Those angry, uneducated people were looking for someone to blame. They didn’t care if they sided with a political party that would be responsible for fucking them over & destroying their democracy, not to mention the massive harm they would do to other groups. No, all that mattered was they found leaders who pretended to have answers. People like quick & simple answers & fixes, certainty & shared anger.

That’s what the Nazi Party gave them. That’s what the Tea Party/Fox News/AM Radio & portions of the GOP are giving this right wing uprising too. Anything intellectual is ignored or met with disinformation & a general air an superior anti-intellectualism. Everywhere I go: home to my parents, at work in the break room, flip on the tv, browse the internet – i see the same message: “My opinion is better than your facts”. This approach is rooted deeply in ignorance & anger most of the time. When the populace stops listening to those with brains & ignores factual information, & opts for those that shout opinions, we got a problem. The Tea Party would be an extremely powerful force if they had a politician that was worth a damn. Every time they have someone who is charismatic, they’re an obvious idiot or crook.

If somebody comes along who is charismatic & honest the US is in trouble bc of the frustration, disillusionment, justified anger & the absence of any coherent response from liberals. What are people supposed to think if someone says ‘I have got an answer, we have an enemy’? There it was the Jews. Here it will be the illegal immigrants from Mexico, the Muslims, teachers, unions, Planned Parenthood, NPR, & blacks (you can toss in atheists, homosexuals & liberals too). We will be told that WASPy private sector males are a persecuted minority. We will be told we have to defend ourselves & the honor of the nation. instead of fixing problems that truly affect the all of the working class, the nation will be convinced to support legislation that will further protect & consolidate power for the corporate elite.

All those privacy rights, the voice we have in our government, & due process checks & balances that protect us all? Those things just get in the way of security & stability. The right-wing that supports these parties & leaders get hurt too, just in a more subtle way – they give away their rights & are too stupid to realize what they’ve done to themselves.

One comment on “Regarding People Who Vote Against Their Own Interests”