The following comes to you through a chain of association I hope will continue. I got it from Krista Smiling Wolf Hill, who got it from the blog of Al Stefanelli, who got it from his friend Joe Markey. It originated with someone posting in an online forum under the screen name “yeahIknow5.” I hope you’ll read it and pass it on in turn.

Reading it, I felt that it might well have been written about my own father, or any number of other folks I know who have locked-down minds and are easy prey for the authoritarian puppeteers of our world. END_OF_DOCUMENT_TOKEN_TO_BE_REPLACED 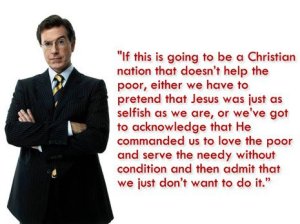 It’s not often you see a true man of faith who’s a public figure in our culture who actually walks the walk.

Stephen Colbert is exactly that.

A devout Catholic (who actually teaches Sunday school), he not only bases his political views on principles like compassion and rationality, he’s extremely active with a long list of charities. He’s clearly a much better man than the buffoon he lampoons, Bill O’Reilly (who this week hilariously tried to one-up an atheist on his show by telling him we don’t know what causes the tides to go in and out).