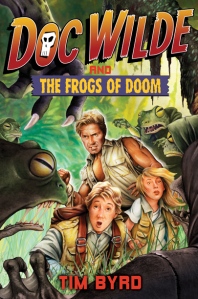 Children’s author Gail Gauthier read Doc Wilde and The Frogs of Doom and offered up some interesting thoughts about it on her blog. She seems to have had trouble pigeonholing it as she read the first part of the story:

I was being way too analytical while reading the first half of Doc Wilde by Tim Byrd…What’s going on here? I kept wondering. Why is this kids’ book called Doc Wilde, a very adult name? Do the kids have an important enough part in this story?…

Then she hit a certain point in the story, “laughed out loud, and was won over…”

Doc Wilde and the Frogs of Doom doesn’t really have one main character. It’s the story of a family. The kids have important places in the story. They do exciting things. They are capable of saving the day…

This book is described as being a “homage” to classic pulp adventure stories, most of which I’m only vaguely familiar with…Still, I think the basic premise behind the book is very clever, and the quality of the writing is excellent…The vocabulary is sophisticated, as are the literary references to writers such as Thoreau and Dante. (The references are appropriate within the context of what is happening in the story, too.) I’m just not sure whether or not the vocabulary and literary references are too sophisticated for child readers.

It’s interesting to read this, because I wrote the book to appeal to young readers and adult readers, though it’s published as being for kids. I wrote it for my son and readers his age, but also for myself and readers my age who still love pulpish adventure tales (and the success of properties like Star Wars, Indiana Jones, The Incredibles, and Batman indicates that we are legion). Indications so far are that I found the balance; kids as young as 8 have read and loved the book, and so have adults up into their 60s. I have yet to hear of anyone getting tripped up by the vocabulary or allusions.

Did the 8 year old automatically understand every word they read? Probably not. But any new words he came across he either grokked a rough context or subconsciously stored as a language seed that’ll grow a bit the next time he encounters the word, and read on. Overall the vocabulary is accessible, and the literary references are contextually understandable even if you don’t recognize the sources (and might make some interested in those sources). I’m not a believer in making sure that every reader will get every little thing in my writing, any more than I’m a believer in only reading books in which I know every word. Exposure to new words teaches new words. The Wildes clearly and dearly love literature and all sorts of knowledge, and their references to bookish knowledge shows character and may serve to help some reader out there more fully realize the wonders of the page.

She was won over, though, and ultimately “got” the book, finding the premise “very clever” and the writing “excellent,” even though she lacks awareness of pulp fiction (though she probably has a broad understanding of its tropes, considering they serve as the bedrock for most genre fiction). And though the sophisticated vocabulary and allusions gave her pause, she met the book past the halfway mark:

It’s possible that this book could work on two levels. The chapters are short, the plot most definitely does not drag, and there are all kinds of mutant frogs. Perhaps one kind of child reader will be attracted to that aspect of the book. Then there is the sly wit regarding a perfect family that knows all and can do all and is full of love for one another because who wouldn’t be full of love for relatives who can invent things and speak Greek and hold their breath under water for an incredibly long time? Another kind of child reader may totally buy into that.

So, a very positive response with slight reservations. She likes what’s on the page, but isn’t 100% convinced it’ll work for some young readers.

Before writing this post, I read back through over two years of her blog to try to get a better sense of where she was coming from. I’m not foolish enough to think I don’t have something to learn from anyone’s reactions or experience, particularly when that person is a successful writer. (For the record, her blog’s quite entertaining, and I’m going to be reading more.) There were a couple of salient points I took away from the reading.

One, she refers to my book as a “father book,” and even after all that reading I’m not entirely clear what that means. It’s rooted in the fact that Doc Wilde serves as a powerful father character in the book, I think, and that the kids’ mother is dead, but I’m not sure if there’s a positive or negative tilt to her observation, or if it’s just a recognition of an archetypal pattern she sees in some books. Regarding Doc Wilde, she did make one comment along these lines I found pretty funny:

The mom…well, the mom is dead because in adventure stories the mom is almost always dead. No mom would allow a kid to rappel down the side of the Empire State Building. You have to get rid of them in order for the kids to be able to do things.

So it may just be that she’s seen a lot of books featuring a central paternal figure and lacking a matching maternal figure. For my part, I can try to analyze my reasons for depicting the family as I did (maybe it’s because I’m a father writing for my son, maybe it’s because Doc Wilde is inspired by Doc Savage who was a bachelor, maybe it’s because my own mother died when I was a baby and I had no positive maternal figure in my life as a child…), but ultimately when I sat down to write and met the Wildes for the first time, this was the state of their family. I didn’t consciously decide who was still around and who wasn’t, they were already like that when I discovered them on the page.

I will say this: from what the Wildes have told me about the kids’ mother, she absolutely would have let them rappel down the side of the Empire State Building. She was the coolest mom ever (and they say she looked almost exactly like Rita Hayworth).

The other big point I took from reading her blog is that she’s very much a believer in books for kids focusing, as much as possible, entirely on the kid characters. As she wrote, “Why is this kids’ book called Doc Wilde, a very adult name? Do the kids have an important enough part in this story?” Ultimately, she recognized that the main character of the book is the family itself, and that the kids are just as important to the action as their dad. They’re not sidekicks, and the book isn’t just a Doc Wilde adventure, it’s an adventure they survive only because all of them are incredibly capable and courageous.

I’m not a huge believer in the necessity of making kids the sole, or even primary, viewpoint characters in fiction aimed at them (though my editor leans that way, which did lead to some serious debate here and there during revisions). Mostly, I believe in letting a story take its natural form as much as possible, and in the case of this book, and these characters, that natural form included the father as a central agent of action, just as his kids are.

I mean, I read dozens of Doc Savage novels before I turned ten, and all the active characters in those stories are grownups. I not only didn’t need the stories to be told from a child’s POV, I didn’t suffer for the utter lack of any kid characters. Similarly, I read Tarzan, Conan, Sherlock Holmes, Robinson Crusoe, The Three Musketeers, and many other works focusing entirely on adults, and enjoyed them thoroughly. I loved Batman, hated Robin (who’d originally been added so kids would have a character they could “identify” with, but how many kids even now dress up as Batman as opposed to the Boy Wonder on Halloween?). Sure I read some great stories that centered on kids — Ray Bradbury’s Something Wicked This Way Comes has alway been a favorite of mine — but in choosing stories to read, the age of the characters was never a consideration.

My son Nathaniel, who just turned thirteen, has also always scoffed at the notion that the age of the heroes has any import. He reads a lot of great kids’ lit — the Warriors series, the Ranger’s Apprentice and Last Apprentice books, the Percy Jones tales — but he’ll just as readily plop down with an adventure that has no kids in it. He, too, would prefer his Batman stories without Robin. When he saw Star Wars: The Phantom Menace at the age of three, he couldn’t stand the little kid version of Anakin Skywalker or Jar Jar Binks (the characters George Lucas put in for kids to love); he identified with Obi-Wan. And when he ultimately saw Indiana Jones and The Temple of Doom, though he enjoyed the character of Short Round, I don’t think the film experience would have been improved for him had the story and action all focused primarily on Shorty rather than Indy.

So, I don’t think you have to be absolutish about viewpoint age in order to create a work that kids will enjoy. And my goal was to write a book that both kids and adults would love, so I was more concerned about finding the balance than I was about tilting it one way or the other.

So far, I’m thrilled with the reaction the Wildes are getting from readers of all ages. And I’m glad Gail Gauthier liked it too.