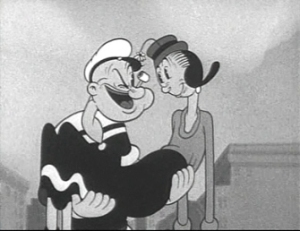 Here in the Byrdcave, we’re old fans of Popeye. Not only did I watch the old cartoons countless times growing up, my son and I have each given Popeye gifts to each other. He gave me Warner Brothers’ awesome remastered collections of the classic Fleischer cartoons of the 1930s (which are wonderful, and far better than the later productions which kinda sucked); I have been giving him Fantagraphics’ gorgeous hardbacks collecting the original E.C. Segar comic strips as they come out.

Wilco, in cooperation with King Features Syndicate, has brought us the first hand-drawn Popeye cartoon in over three decades:

I hope Popeye rebounds by hooking up with Betty Boop.

If you never saw them, or need a reminder, or it’s just been too long, here’s one of the Fleischer classics, from 1936, in amazing quality:

And for bonus giggles, here’s a commercial featuring Popeye and Bluto that drove right wingers crazy when it aired:

UPDATE: Of course, now that I think about it, if we watch the Fleischer first, then the Wilco, then the Minute Maid cartoon, maybe we’re actually getting the full story of Popeye’s romantic life…