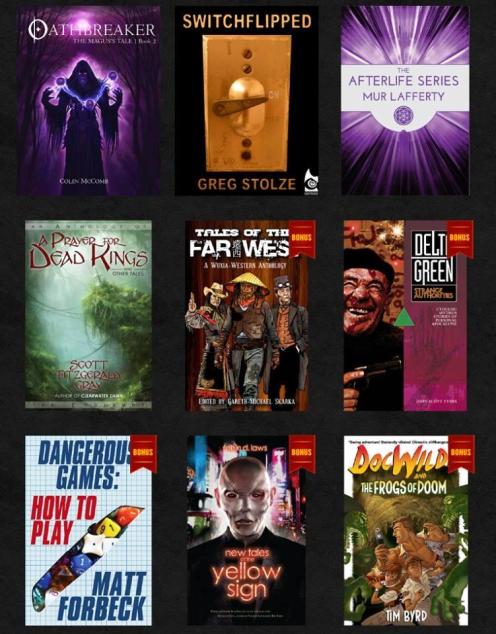 Allen Varney is a really smart man who has put together a cool system in which he sells “bundles” of books and games to folks at the price they choose to pay (with a small minimum price established for a smaller set of the books offered)), the proceeds going not only to the authors involved but to specified charities. You may have seen other such bundles, and they’re a great idea.  Last summer, I participated in one of his earlier fiction-oriented bundles and it was a great experience. Allen has since honed his system by running many more bundles, and more folks have gotten interested in them, so he is temporarily resurrecting some of the earlier ones to satisfy the requests of those who missed them. The one I was part of is one of them, but will only be available for a very short time (just 48 hours, and the countdown has already begun!).

The charities to benefit from this bundle are fighting for literacy and freedom of expression all over the planet:

Just think, you can get my own very well-reviewed, fully-illustrated adventure for all ages, Doc Wilde and The Frogs of Doom, along with a bunch of other high quality genre tales for just $4.95 or a bit more (Frogs of Doom is retail price $6.99 all by itself), and you’ll be contributing to the literary well-being of all of human kind.

Below are the details from the Bundle of Holding site; grab this adventurous deal while you can (as I type this line, the countdown is at 1 DAY, 22 HOURS, 49 MINUTES, 56 SECONDS!)

Adventurer! After months of wandering, the fellowship of Adventurous Scribes returns to bring you once again the Bundle of Holding +3, our June 2013 collection of fourteen novels and story collections by leading tabletop roleplaying game designers. In case you didn’t hear about these imaginative stories last summer, we’ve cast a 9th-level resurrection spell to give you a new chance. For just US$4.95, you get all five books in our core collection in DRM-free Kindle, ePub, and .PDF versions:

And if you pay more than the threshold price of $9.95, you’ll level up and receive our entire collection of nine bonus books:

And remember, even if you already bought this collection back in June, now you can send a Bundle of Holding as a gift. These ebooks are suitable for any tablet, phone, or ereader, and they make great gifts at any time of year.