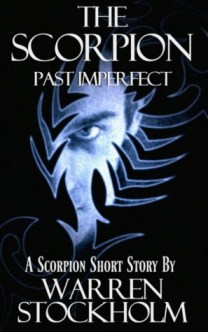 Back in 2009, I reviewed a modern pulp adventure titled The Sting of the Scorpion. As I said then (review here), I enjoyed the hell out of it, and ever since I’ve been hoping to see new Scorpion adventures. A second book has been due for a while, and looks to finally be coming soon, but in the meantime, the author has released a short story featuring the hero, called “Past Imperfect.”

As I wrote before:

As for the hero, in classic pulp fashion, The Scorpion by day is a wealthy paragon, living in the tallest building in the city, assisted by a mysterious Asian woman, dedicated to his mission against evil…but he’s not just a hero with a dark past, he’s a hero with a really dark past. And he’s not really human, in some very interesting and dangerous ways. Richard Wentworth dressed as The Spider to scare criminals into thinking he was a monster; Kurt Reinhardt becomes The Scorpion because he is a monster.

Reinhardt is a compelling protagonist, the action frequent and brutal, the city a violent and noirish place, and the plot interesting. Not only that, but Stockholm can actually write very well…I do have to warn readers of delicate tastes away, however, because this is a very grim and blood-splashed work.

I just read it, and it’s understandably slighter than its longer predecessor, but still a lot of fun, and a good taste of Scorpion action and craziness. It needs a bit of editing (little things, like having a character “pouring” rather than “poring” over some documents), but is a sleek and clever read and easy to recommend at an ebook cost of 99¢.

You can buy it here. You can also buy The Sting of the Scorpion here for only $2.99 (and you should).

(Also, if you’re a fan of pulp adventure, make sure to check out the news about my Doc Wilde series!!!)