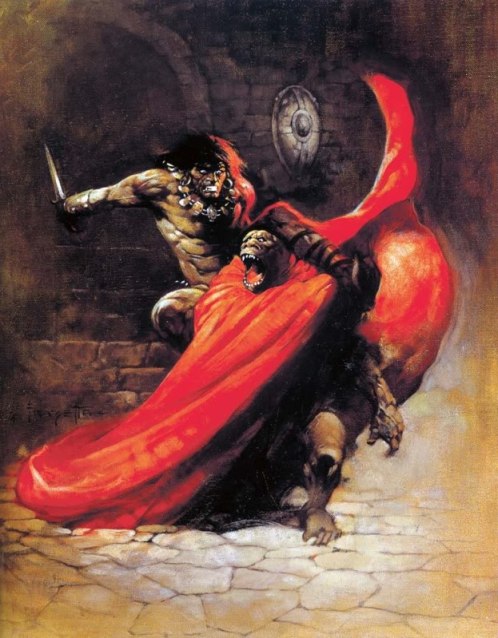 Let me further break it down for you.

I’m a big fan of Robert E. Howard’s Conan of Cimmeria (as I wrote about here back in 2004, a post I enjoyed reading again after all this time). A couple of weeks ago, my son and I finally got around to watching the new Conan the Barbarian. Or well, the first half of it.

Then we took a break to go do something, planning to return later. But as the days passed, we kept deciding instead to watch episodes of The West Wing, which neither of us have ever seen and have been catching up on.

“What you want to watch? The rest of Conan?”

This is a fifteen year old, mind you. A lover of carnage, a devoted video game junkie. A male teenager.

Of course, this speaks to his own intelligence and taste, as well as the greatness that is The West Wing. But it also speaks, loudly, to the quality of the Conan flick.

Well, we finally finished it. It pretty much sucks.

Which stinks, because Jason Momoa (Khal Drogo from A Game of Thrones) is a great choice for Conan. And the movie has good production values. It’s just that the writers, director, and possibly the editor need to get jobs in fast food, post haste, before they film again.

There’s just a general lack of creativity and intelligence to the movie. They have the fantastic original Howard stories to work from (as well as the excellent Dark Horse comics written by Kurt Busiek a few years ago), and they recycle the “Conan is seeking the wizard who killed his father” trope used in the old Conan movie (but none of the original tales) but lose any actual emotional resonance it had. And they give us the hackneyed “wizard is gathering pieces of a busted-up magic item that will allow him to take over the world” plot, and do absolutely nothing fresh or remotely interesting with it.

And the narrative is just fucking sloppy. At one point, Conan and the female lead have some naked fun, then fall asleep. She awakens before him. Mind you, this chick is an essential ingredient in the bad guy’s plan, and the bad guy is hunting her down, and the bad guy is a bad guy. Though not very interesting. And so what does this smart, scrappy woman do? She gets dressed and leaves. Why? I have no fucking idea. The movie gives us no explanation why she is sneaking away from the mighty warrior who is keeping her alive and who she likes well enough to screw. Seemingly within moments, the bad guy happens along and finds her, haplessly alone on the road.

In another scene, Conan and a thief pal are sneaking through an underground labyrinth in waist-deep water. A huge tentacle slithers up and grabs the thief, yanking him under. Conan dives in after him…and suddenly they are in water so deep you can’t see the walls or floor. Conan swims down, down, down into this waist-deep water, and saves his friend.

And the very last scene, which is supposed to be powerful and ties into the whole “avenged my dad” thing, is just embarrassing.

The old Conan the Barbarian with Arnold Schwarzenegger is a far better piece of work, though Momoa is, himself, a better Conan. He looks exactly right, he has charisma, and he can actually act. I really hope he gets another chance as Conan, but with a better team.

Like me. I’d write the hell out of a Conan movie.

(Note for regular friends of the blog: the movie is still vastly superior to the last Mummy flick).