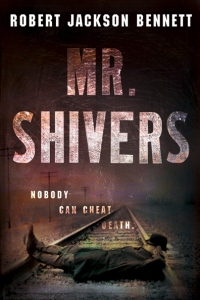 By the time the number nineteen crossed the Missouri state line the sun had crawled low in the sky and afternoon was fading into evening. The train had built up a wild head of steam over the last few miles. As Tennessee fell behind it began picking up speed, the wheels chanting and chuckling, the fields blurring into jaundice-yellow streaks by the track. A fresh gout of black smoke unfurled from the train’s crown and folded back to clutch the cars like a great black cloak.

I met Robert Jackson Bennett briefly at SIBA (Southern Independent Booksellers Alliance) in September 2009. When I did my signing for Doc Wilde and The Frogs of Doom, he was signing at the next table, and we chatted briefly (I recall telling him his title was cool) and exchanged inscribed copies of our books. 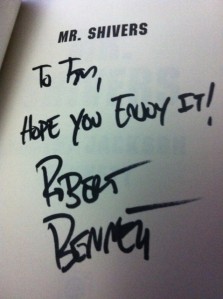 Know what? When I finally picked the book up months later, I did enjoy it. A hell of a lot.

Connelly shut his eyes as the wave of smoke flew toward him and held on tighter to the side of the cattle car. He wasn’t sure how long he had been hanging there. Maybe a half hour. Maybe more. The crook of his arm was curled around one splintered slat of wood and he had wedged his boots into the cracks below. Every joint in his body ached.

He squinted through the tumble of trainsmoke at the other three men. They hung on, faces impassive. One of them called to the oldest, asking if it was soon. He grinned and shook his head and laughed.

I read a lot. Sometimes I’ll be really in the groove, plowing through books, finishing one and reaching immediately for the next, stacking them up in little haphazard stacks of fait accompli. And sometimes, in the midst of that, after I’ve read a few books I had enjoyed well enough, I’ll start a book that immediately really grabs me, that makes me slow down just to taste the prose, that reminds me that yeah, there are some authors out there who can really write.

Bennett’s debut novel, Mr. Shivers, is one of those books.

Ten miles on Connelly felt the train begin to slow and the countryside started to take shape around him. The fields all seemed the same, nothing but cracked red earth and crooked fencing. Sometimes there were men working in the fields, overalled and with faces as beaten as the land. They watched the train’s furious procession with a country boy’s awe. Some laughed and called to them. Most did not and watched their coming and going with almost no acknowledgment at all.

If John Steinbeck and Stephen King ever wrote a book together, something like Mr. Shivers would have been the result. Or maybe William Kennedy and H.P. Lovecraft. Or Cormac McCarthy and Karl Edward Wagner.

I won’t tell you much about this fine book, because I don’t want to spoil anything. In fact, the text from the back of the book tells you everything I’d tell you about the plot:

A time when the desperate and the broke head west to start over.

Connelly is one of them. But he is not seeking a new life.

Because out there, riding the rails, stalking the camps, is the scarred vagrant who murdered Connelly’s daughter. No one knows him but everyone knows his name:

Bennett’s hero moves through the stark, brutal, hopeless landscape of the Depression, tracking vengeance against this vicious killer who turns out to be something more than just a killer. And through his story we see the dark passage of one time into another, a shift in the world, as frightening things are overwritten by other more epically frightening things.

It’s one of the best books I read all year, and a grand start to what hopefully will be a long, prolific career.