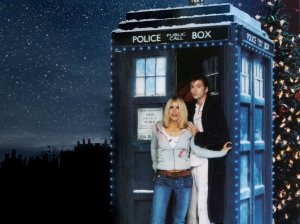 I was about twelve or thirteen when I first found out about Doctor Who. The Doctor, though he’s nearly a thousand years old, is also only about four months older than I am, having made his debut in Nov. 1963 (I debuted in March 1964). But his adventures were on the BBC, and I was stuck in Bumfu Jonesboro, GA, where we didn’t get much BBC except whatever nuggets got picked up by PBS.

So my first exposure came through Doctor Who paperbacks, that I think were probably just novelizations of episodes from the show. I can sort of remember the covers, and I enjoyed them enough as a young teen that I lamented the fact I couldn’t see the actual series.

Later, and I have no idea how much later, I got to see an actual episode. Maybe it was being shown on PBS, maybe I saw it at a science fiction convention…I’m not sure. All I recall is that I was seriously disillusioned, because the show had really cheesy special effects and was, I think, campier than I’d expected. And I really don’t care for camp as a general rule. Even as a kid I disliked it.

So for most of my life, that was my Doctor Who experience. And I remember instances where I cited the show when joking about low budget genre productions that were really cheesy.

Doctor Who is the longest running science fiction show in the world. The original series ran from 1963 till 1989, there was a TV movie in 1996 that was a failed attempt at relaunch, then the show successfully relaunched in 2005 and is going strong. At this writing, there are 753 episodes. There are also two spinoff shows involving characters who originated on Doctor Who (Torchwood and The Sarah Jane Adventures), with a third in the works focusing on The Doctor’s robot dog K-9 from the 1970s.

I watched the TV movie in 1996, and for the first time since reading those paperbacks I enjoyed Doctor Who. I don’t remember anything about it now (I’m going to rewatch it soon to see if it holds up to my older, more jaded standards), but at the time I was disappointed it didn’t go to series.

Then, recently, I started watching the rebooted series that began in 2005, and it’s simply one of the most marvelous television shows there’s ever been.

For the uninitiated,The Doctor (who isn’t actually called “Doctor Who,” though there are frequent bits where someone will refer to The Doctor” and someone else will say “Doctor Who?”) is a 900+ years old Timelord, last of a great and powerful race with the technology to travel all of spacetime. The Timelords were wiped out in the last “Time War” against hideous cybernetic (and regularly reappearing) villains called Daleks. The Doctor travels history and the universe, engaging in all sorts of wonderful, wonderful, wonderful adventures. Burdened by his lot as the last of his kind, he possesses a poignant loneliness that leads him to pick up the occasional random person to take with him as an adventuring companion (almost always a comely, smart woman — there was a humorous recent bit where he was between companions, and clearly pining, when an old guy asked if he could come along, and The Doctor told him he travels alone).

In spite of his predilection for distaff company, proceedings seem generally to stay platonic…though matters of the heart are woven through these latest seasons with great effect, giving these wild adventure stories a sense of romantic yearning and connection and loss that is at times incredibly moving.

Despite this sense of loneliness, the show is in no way angsty. The Doctor elevates it far above that, because he is an engine of sheer wonder and exuberance. He thrills to his adventures, even in the darkest heart of danger, always wide-eyed, hungry for experience, and giddy with life itself.

The Doctor is possibly the most optimistic, moral hero I’ve ever encountered in fiction, always willing to give his enemies a chance to back off, to do the right thing or not do the wrong one, because he doesn’t want to hurt even those who do harm…but they usually don’t take his warning, and they suffer for it.

In one storyline, the Doctor flees his enemies in apparent terror, but we ultimately discover he ran from them as an act of mercy, so he wouldn’t have to destroy them. Alas, for them, they caught up with him and wouldn’t accept his offer of peace.

Have you figured out that I absolutely love this show yet?

I don’t think I’ve been made so giddy by a show since the best seasons of Buffy the Vampire Slayer. I’ve now seen the full run of the reboot series, including specials, and the desire for more is like a hum in my brain. I was even thinking about reading some of the novels based on the series, and I don’t read licensed fiction or novelizations. I just don’t. But I love these characters so much, I may this time.

If you haven’t seen the new Doctor Who, watch it. The first three seasons are streamable on Netflix (and all of them are rentable on disk). And you’ll want to start with the first episode from 2005 (Season 1 of the new series, since it’s numbered separately from the original), because there is actual character development and long term story development. This show is fun, witty, smart as hell, and contains great performances.

Just be on the lookout for the Big Bad Wolf.

[UPDATE: I’ve now seen the 1996 movie again. It was fairly generic TV fare, I’m afraid, and I’m glad it didn’t go to series because if it had we may never have had the brilliant and whimsical series we now have to enjoy.]

2 comments on “Regarding Doctor Who”