Do you know Cthulhu?

If you knew Cthulhu as we know Cthulhu, oh, oh, oh what a god… 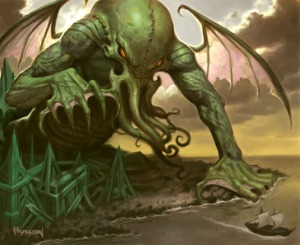 I’ve always loved scary stories. One of the few positive memories I have from my childhood was staying up with my father and watching classic Universal monster movies in a rocking chair. I loved scary comics like Creepy and Eerie and monster comics like Marvel’s Werewolf By Night (I remember, when I was about 9 or so, scrambling around the desolation of our suburban neighborhood by moonlight in a torn shirt pretending I was the werewolf). I could quote Edgar Allen Poe, and read all the horror I could get hands on, from Dracula to “The Monkey’s Paw” to Something Wicked This Way Comes. Well, I read most things I could get my hands on. But horror was among my favorites.

The first fiction I ever read that actually scared me, though, was H.P. Lovecraft’s story “The Dunwich Horror.” This tale offered up an unspeakable invisible horror terrorizing a New England landscape that took root in my imagination with such force that I remember laying in my dark room at night, wanting to sleep, but watching the window waiting to see a thing I could not see…which of course doesn’t make sense, but to my kid’s mind it sure did.

That tale, I found out, was just one in Lovecraft’s cycle of stories that are known as the Cthulhu Mythos. These stories tell us that beyond our ken, out in the darkness of space or in the depths of the sea or in other dimensions, ancient gods older than time are hungrily waiting to get back to our world and destroy our reality. Chief among them is the sleeping god Cthulhu…

These Great Old Ones…were not composed altogether of flesh and blood. They had shape…but that shape was not made of matter. When the stars were right, They could plunge from world to world through the sky; but when the stars were wrong, They could not live. But although They no longer lived, They would never really die. They all lay in stone houses in Their great city of R’lyeh, preserved by the spells of mighty Cthulhu for a glorious resurrection when the stars and the earth might once more be ready for Them… (H.P. Lovecraft, “The Call of Cthulhu”)

Lovecraft’s work has been highly influential, and Cthulhu and other elements from the mythos have appeared widely in other creator’s work. Neil Gaiman and Stephen King have written tales involving these ancient evils, as have Robert E. Howard, Robert Bloch, and Ramsey Campbell. Rod Serling’s Night Gallery adapted some of Lovecraft’s work, the creators of the film Alien cited Lovecraft as an influence, and The Simpsons and Jon Stewart have made Cthulhu references. A huge library of Lovecraftian material for roleplaying games (traditional face-to-face games, not video) exists, springing from Chaosium’s classic Call of Cthulhu (titled after one of the original stories). Lovecraft allusions pop up in the songs of Black Sabbath and Metallica. There have been Cthulhu video games, like Call of Cthulhu: Dark Corners of the Earth, and many, many bits of lore and homage in games from Alone in the Dark to World of Warcraft. Mike Mignola’s Hellboy, both in comics and in film, draws heavily on the Cthulhu Mythos.

And there have been movies. Stuart Gordon’s Re-Animator and From Beyond are popular adaptations of Lovecraft’s work, though they supply an over-the-top gore and campiness that are a far cry from the humorless, dark terror of the original tales. Gordon’s Dagon, an adaptation of “The Shadow Over Innsmouth,” was far more effective, and creepy, telling the tale of a coastal village overrun by the cult of Dagon, one of the ancient gods who turns his followers into mutated fish-folk. 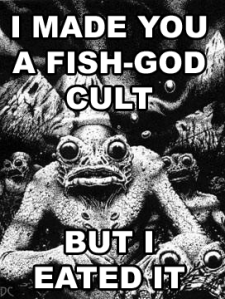 “The Shadow Over Innsmouth” is one of my favorite Lovecraft stories, and Dagon is my favorite Lovecraft film. I like the Dagon stuff so much, in fact, that the evil threat in my  novel Doc Wilde and The Frogs of Doom is an in-the-face homage to the fish god and his followers. The book’s as much a love letter to Lovecraft as it is to Doc Savage. (I plan to rewatch Dagon soon, and may write more about it when I do). 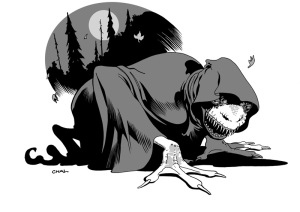 A Frog of Doom

Tonight, I watched one of the more recent films based on Lovecraft’s work, 2005’s The Call of Cthulhu, based directly on H.P. Lovecraft’s 1926 short story. This flick, a selection at both the Sundance Film Festival and the Seattle International Film Festival, was produced by the H.P. Lovecraft Historical Society. It’s not just a perfect rendition of Lovecraft’s tale, it’s brilliantly made in the style of a 1920s black and white silent film, the basic conceit seeming to be “what would a film of the story be like if it had been made when the story was published?” The conceit works not just for novelty’s sake and atmosphere, it allows the low budget special effects to shine, resulting in a stylistic, almost German Expressionistic, feel that really suits the story. 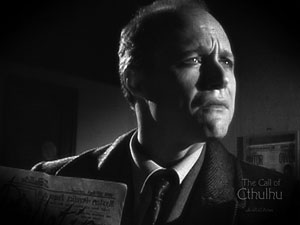 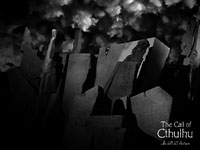 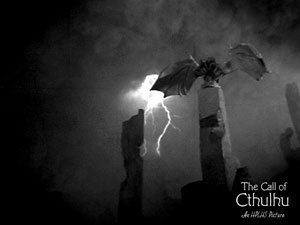 This movie works perfectly. I can’t recommend it highly enough, both as a Lovecraft adaptation and a work of film art. Apparently the filmmakers are currently at work on a followup, The Whisperer in Darkness, based on Lovecraft’s 1931 story. The producers are continuing their strategy of filming according to the style of the time the story was published, so this one will also be in black and white, but will be a talkie. It’s supposed to be out some time this year. In the meantime, get your hands on The Call of Cthulhu, it’s a treat.

2 comments on “Saturday Night With Cthulhu”