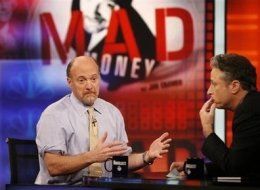 Every so often, Jon Stewart puts down his coffee mug and picks up a BIG DAMN STICK. This week he picked the stick up and beat CNBC’s Jim Cramer metaphorically black and blue, at the same time launching a very aggressive, solidly reasoned, well-researched indictment of CNBC for the network’s blanket functioning as cheerleader and enabler to the Wall Street crooks who sank our economy, instead of acting like a news channel with real journalists and reporting the truth.

If you haven’t seen this footage, you should. If you only saw the parts of the interview shown on The Daily Show, you should watch the full unedited interview online. Every huckster and jackass and quisling in the media is talking about the economy, but I haven’t seen anyone address our economic problems, and their causes, with the clarity and smarts that Stewart has.

Click the image above to go watch. Really. You have to see this.