It’s cold comfort, after eight years,  degradation of the Constitution, loss of global respect, the near destruction of of our economy, and hundreds of thousands of deaths, but the majority of Americans have, indeed, finally recognized that George W. Bush is the Omega Turd of U.S. presidents:

President Bush will leave office as one of the most unpopular departing presidents in history, according to a new CBS News/New York Times poll showing Mr. Bush’s final approval rating at 22 percent.

Seventy-three percent say they disapprove of the way Mr. Bush has handled his job as president over the last eight years.

Mr. Bush’s final approval rating is the lowest final rating for an outgoing president since Gallup began asking about presidential approval more than 70 years ago.

The rating is far below the final ratings of recent two-term presidents Bill Clinton and Ronald Reagan, who both ended their terms with a 68 percent approval rating, according to CBS News

Recent one term presidents also had higher ratings than Mr. Bush. His father George H.W. Bush had an end-of-term rating of 54 percent, while Jimmy Carter’s rating was 44 percent.

And Dick Cheney? He’s leaving office with a 13% approval rating. 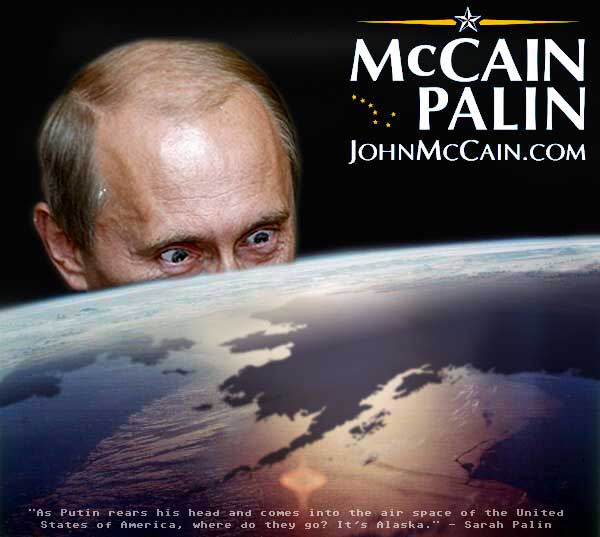 Here we see a video by the lovely, profane, and lovely comedian Sarah Silverman, in which she tries to convince young Jewish voters to visit their grandparents in Florida to get them to vote for Obama.

more about “God I Love Sarah Silverman (and envy …“, posted with vodpod

John McCain’s poll numbers are plummeting, so he’s now trying to run out the clock. He’s realized that the more voters see of him and his fulsome running mate, the worse things get. So he’s trying to take cover behind the financial crisis, trying to appear presidential by “suspending his campaign” in order to go to Washington and personally save the economy.

To John McCain, this does two positive things. First, and probably most importantly, it gets him out of the line of fire for a while, he can pretend to a statecraft that doesn’t allow for the pettiness of campaigning and duck questions even more than he’s already been doing. He can put off a potentially disastrous face-off with the more charismatic and far more intellectually vigorous Barack Obama by “postponing” the first debate, hoping all the while that since time is so tight before the election, they’d never be able to get around to it again. Ideally, he’ll be able to get Palin out of having to debate Biden as well, if he can wrangle the schedule just right.

Second, if he’s in Washington looking all serious and such for the cameras, once the bailout bill goes through, he can pretend he was integral to its passage. It’s not statesmanship, its photo op politics at its most cynical.

In the process of starting all this, he’s already shown himself yet again to be an utter liar. Scheduled to appear on David Letterman’s show, he called the host to cancel, claiming he had to race back to Washington. Unfortunately for McCain, Letterman discovered that McCain hadn’t actually left by the time the show was taping, and was instead still in town sitting down for an interview with Katie Couric at CBS.