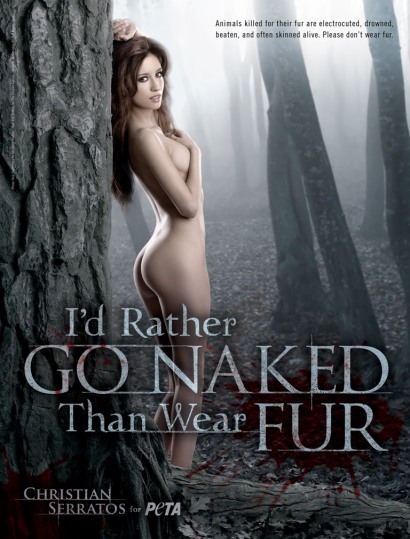 See that picture up there? That’s representative of the good that the organization PETA (People for the Ethical Treatment of Animals) does in the world. When it comes to providing cleverly staged fap-material of celebrities, they’re very good.

Know what they’re also good at? Picking ridiculous battles, like trumpeting that Fishkill, New York should change the name of its town because the name was mean to fish. They are extremists, raging at humans for killing animals, eating animals, using animal products, training animals, exhibiting animals, even keeping animals for pets. They make a hell of a lot of money from people who contribute to their coffers because they simply equate PETA with, well, ethical treatment of animals. You know, kindness. Saving animal lives. That sort of thing.

But PETA are huge fucking hypocrites.

And they’re responsible for the cold-blooded slaughter of thousands of animals entrusted to them by people who don’t know any better.

A few weeks ago, the nonprofit Center for Consumer Freedom reported that PETA slaughtered 96% of the stray dogs and cats it, ahem, rescued last year. Since 2005, PETA has killed over 90% of the animals delivered into its care. Since 1998, PETA has killed nearly 28,000 animals. As reported in the New York Post:

In 2010, the Virginia Department of Agriculture and Consumer Services discovered that fully 84 percent of the strays taken in by PETA were killed within 24 hours.

No wonder: The report concluded that PETA’s headquarters “does not contain sufficient animal enclosures to routinely house the number of animals annually reported as taken into custody.”

So, off they go to the gas chamber.

See? PETA sucks. Don’t give them any money. You can get a lot more info at the website www.petakillsanimals.com.