Cliff Caldwell was a splintered twig of a kid, short and gangly, a twitchy scarecrow without enough stuffing. His hair was blond and dirty, but always combed down with a troubling precision. He stared at the world through glasses with big thick frames, and his clothes were ratty and didn’t fit right.

Cliff wasn’t very smart, and he moved from grade to grade largely out of an embarrassing agreement by teachers to pass him rather than actually help him in any meaningful way. Teachers even allowed him to grade his own tests because his handwriting was incomprehensible.

Outside of school, you’d sometimes see Cliff walking along the roadside, stomping swiftly along, his gaze fixed straight ahead as if he were racing obsessively toward some definite goal. He was going where he was going, and he seemed oblivious to everything around him.

I don’t know how old we were when I met Cliff, I just remember him always being around when I was a teenager. He was one of those unfortunate kids who was born broken, who can’t function properly, and who thereby becomes the target of derision and abuse from most of his peers.

The last I heard about Cliff was in 2009, when this happened:

“The holidays can cause stress for all of us. This must particularly apply to those slaving in Santa’s workshop. One case in point: 45 year old William C. Caldwell, III, surely the frontrunner for 2009 Angry Elf of the Year.

“It may come as no surprise to anyone that your local mall Santa receives excellent security training these days. And a good thing, too. On Wednesday evening, the mall Santa on duty at Southlake Mall in Morrow, Georgia came face to face with a potentially explosive situation. The 45 year old Mr. Caldwell, in full elfin attire, wanted his picture taken with Santa. When his turn came, he informed Santa that he had in fact brought some of his own tools from the workshop… specifically, a bag of dynamite.

“It probably should have raised a few eyebrows that a 45 year-old man, dressed as an elf, was standing in line with a bunch of kids waiting to speak with Santa… particularly when he’s got this look in his eyes: 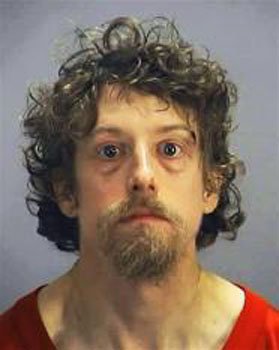 “…The quick thinking Santa immediately informed the Southlake Mall security team of the potentially dangerous elf. Authorities contacted local police who evacuated the mall, blocked off streets and cordoned off the area. Georgia Bureau of Investigation officers arrived along with the Morrow Police. They completed an exhaustive search of the mall. Three suspicious bags were discovered near Santa, but no explosives. Fear that Caldwell would actually drop an elf bomb subsided after the ‘all clear’ was given at 10 p.m., local time…”

Fortunately, this was at worst a crazy whim of Cliff’s tormented mind, at best an actual cry for help. No one was hurt. I have no idea what happened with Cliff after he was arrested, but I hope he found some badly needed help and some happiness and peace.

The reason I’m telling you about Cliff is that he was instrumental in my learning a lesson about myself that has stuck with me for years, a lesson that makes me all too able to understand some of the dark impulses that drive many of the people who support Donald Trump (and, frankly, the Republicans in general).

I’m already quite familiar with the basic unenlightened and racist mindset we see flying its Confederate flag at Trump rallies. I’m from Georgia and was raised by those people. But the lesson I learned through Cliff Caldwell is about something deeper and more intimate than that, about the very nature of self and how it can turn rotten.

As I said, Cliff was often a target of abuse from our peers, from cruel insults and mockery to outright violence. I remember sitting nearby in one class as a group of popular kids (the oft stereotyped jocks and cheerleaders, acting according to stereotype) clustered around Cliff’s desk alternately teasing him and acting like they were his friends. Everyone would laugh. Why not? It was just Cliff Caldwell.

One day, in tenth or eleventh grade, a group of bullies started pushing Cliff around in the locker room, shouting in his face, yanking at his clothes, shoving him into the wall. Laughing at him. To my lifelong shame, I joined them.

Why did I do that? I was a kindhearted kid, a gentle kid, a smart kid who had somehow never absorbed the racism or bigotry I’d been raised in. I had not only always treated Cliff with kindness, I’d stood up for him at times. And here I was,  clawing at his arm, laughing in his face.

It was because, as strong as my sense of self was, as deep my compassion, I was broken too. I was horribly abused at home, so depressed I came close to suicide several times, and of uncertain social value among my peers. I felt small. I felt threatened. And on another day, it might have been me under attack instead of Cliff, though I was at least able to fight. Cliff wasn’t.

I thought I was showing strength. But I was really showing the depths of my own despair and weakness.

Then, I really lost it and did something that degraded me far more than it degraded Cliff.

I spat on him.

I actually fucking spat on him.

And this other kid, I can’t remember his name, looked me right in the face with such a look of disgust that it burned me to the quick. “You spit on him?” he shouted, and pulled me back.

And that, my friends, was the moment of epiphany. Through that guy’s eyes, I saw what a craven piece of shit I had allowed myself to become in my desire to belong and to be on top.

I lashed out because I was weak and afraid, and I went too far. I’m pretty sure I’d have walked away ashamed of myself anyway because, as I said, I was a good kid. This was an aberration. But good kid or not, it was me attacking and spitting on a kid whose only sin was that he couldn’t function in the world, a kid fighting his own battles who didn’t need me adding to them.

That other kid, that hero, didn’t become a part of the mob, didn’t give in to those dark petty drives. And he jerked me back into the right, painfully and swiftly, and I am forever in his debt. His disgust with me taught me this necessary lesson much more powerfully than I’d have learned it on my own. I had allowed myself to be drawn into terrible dark waters, and he helped me back to shore.

Trump people swim in those dark waters. They ignore the shore. They thrive out there, making themselves feel strong by tearing others down. The poor, the lost, the weak, the Others…all targets of chthonic rage that can’t find a healthy outlet because the members of the mob don’t bother looking for one. They scream at the light because, like that hero kid’s eyes on me, it makes them see themselves. But they never learn the lesson I learned in that horrible moment.

They are more comfortable in the dark, with their own kind.