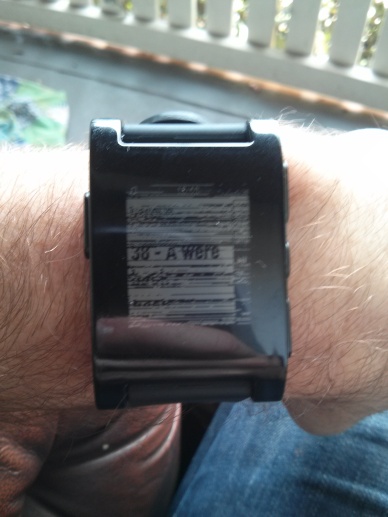 My Pebble is dying.

As it dies, after less than three years of extremely limited use, I keep getting emails from Pebble excitedly offering me the chance to buy the new Pebble Time, their latest chronographic wonder.

Back in early 2012, I was happy to support Pebble on Kickstarter. They seemed like cool folks with a cool product, and I got caught up in the excitement of their historically successful fundraising endeavor. It’s been years since I actually wore a watch, but thought that maybe the functionality of having a watch that smoothly interacts with the phone in my pocket would make doing so worthwhile. And I felt good supporting some dashing entrepreneurs trying to do something great.

It took nearly a year before the watch arrived, but that was fine. Delays happen, plans go awry. But finally it arrived, and it was pretty shiny in its package…

…but I was hit immediately with buyer’s remorse. It seemed like a decent enough device, if a bit 8-bit in its aesthetic, but I realized that I simply had little use for it. So I tried a few times to sell it to my friends on Facebook, without luck.

I resigned myself to having unwisely purchased the thing and being out the $115 it cost (Kickstarter price; the retail price on this blighted thing is $150), and hoped to find uses for it as time passed. Eventually I started wearing it to the pool so I’d know when it was time to get my pale-skinned self back into the shadows before broiling began. This was all I was doing with this watch, swimming with it in my apartment pool three or four times a week for twenty-to-thirty minutes each time. As the watch is allegedly waterproof down to 50 meters, this should have been fine.

But, very quickly, it started malfunctioning. Since I was in the water when I noticed this, I assumed it was because of the water. I emailed their support:

I was one of your Kickstarter supporters and my watch is starting to act up. I very rarely wear it, but one of the times I do wear it is when I’m in the pool, to keep track of my time in the sun (I’m cursed with very fair skin). I’ve used it this way maybe fifteen times since I got it.

Today in the pool, I glanced at the screen and saw that it was going haywire. The screen would white out, and it would draw random lines and patchily return to its display. It’s still doing so, though I suspect as it dries out the problem will go away…but if the waterproofing has slipped I’m stuck with a watch that has lost core functionality.

This year, with the watch well out of warranty, I’ve tried to continue using it at the pool and the problems have become nearly constant. Some days, it works the whole swim, but more often it works intermittently, and more and more it simply goes blank and works not at all. I’d say it actually works properly about a tenth of the time, based not just on my pool experiences but on observation throughout the day.

As I said, I’d assumed initially that the issue was water-based, but further testing shows it’s not. The Pebble malfunctions just as often when it’s completely dry. It malfunctions if I wear it for a short walk to get the mail. It malfunctions sitting on my desk, charging. Malfunctioning is apparently its favoritest thing.

I’ve looked up their troubleshooting suggestions and done them all, including a complete factory reset, and the problem persists. Now, even when it’s working (which never lasts more than a few minutes), the image is corrupted and missing pixels.

And searching online, I found quite a few others with similar issues. Just read the 1 and 2 star reviews on Amazon.

Additionally, when the Pebble was offered on Kickstarter, the manufacturers bragged that it would have a great e-paper screen, using the technology seen on Amazon’s Kindle and other e-readers. When it actually arrived, that great e-paper screen was nowhere to be seen; the malfunctioning, low-quality display is actually a very primitive-looking LCD screen.

So, no, I don’t think I’ll be buying that new Pebble watch, thank you. I’d be better off with a sundial.

One comment on “THE PEBBLE: Worst Piece of Crap Watch I’ve Ever Had (Review)”