Recently, Jesus gave Zeus the finger. Or, rather, Zeus took it.

There was a huge lightning storm over Rio de Janeiro and a bolt blasted the statue of Christ which looks over the city, knocking off one of His fingers. While you’d think that Jesus could protect Himself from such an attack, it’s probably not our place as mere mortals to adjudicate the MMA matches of the gods.

Lightning is a scary thing, electricity in its most feral state. Crackling death from above. Surprisingly, though, only about 10% of people who have intimate encounters with it don’t survive. Some that do are scarred with fractal maps in their skin, branching networks of sizzling branchwork like tattoos of evergreen fronds or ivy. 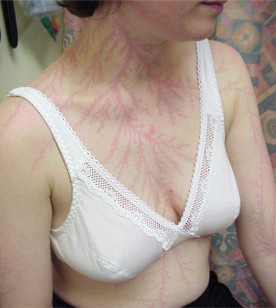 I’ve had a special relationship with lightning for years, starting, I guess, when I was struck by lightning when I was a teenager. I survived. I had no visible scars. I wasn’t even hurt, as far as anyone could tell.

It happened one stormy day. A friend and I were cavorting in the rain, chasing each other, jumping at the crashes of thunder, laughing our asses off. Ultimately, soaked and getting cold, we headed for his house. We splashed in, drenched, and his mother informed us that there was a tornado warning. Later, we found out one had touched down less than a mile away. She insisted we dry off, so we headed to the bathroom, and as we entered, a bolt of lightning crashed through the window (open, as his mother had forgotten to close it for the rain, so I think the lightning was riding the breeze as lightning can do). It went through my friend and me, knocking us off our feet, and scorched the floor under our feet.

We were incredibly lucky. Neither of us was hurt, though we were scared shitless and our ears were ringing. This amount of luck in a lightning strike is rare but not unheard of; most burn damage resulting from a strike is from superheated objects (like change in someone’s pocket, for example), and most deaths result from cardiac arrest. We were both young and fit, so if our hearts were spooked by the blast, we didn’t know it. We didn’t even go to the ER.

Of course, not all damage is visible. Brain damage is a common effect of lightning strikes and can lead to memory impairment, irritability, terrible headaches, even personality change. And, unsurprisingly, depression. And, as regular readers of this blog know, I have depression big time.

Through therapy, I’ve learned that much of my struggle is attributable to loss of my mother as a baby and familial abuse throughout my formative years. But it’s possible the strike contributed.

But electricity in the brain has also proven helpful in my fight. I’ve had two rounds of ECT (electroconvulsive therapy, aka shock treatment) in the past few years, the second as recently as last November and December. My depression is a stubborn, mean mother fucker and was highly resistant to everything we were throwing at it until we decided to sing the brain electric. Afterward, my short term memory is sort of crap (though it already was, as depression itself is hell on the memory), but my focus and motivation are remarkably improved. This strategic use of electricity blasted straight into my brain has been literally life-changing. The fact that you’re reading this now, and that I’m blogging again in general, is directly attributable to it.

I’ll return next Wednesday with the letter F. I hope you’ll stop by. I’m a writer and I post about a wide variety of non-alphabet-specific topics. Feel free to comment under my posts. If you want to subscribe to the blog, there’s a button in the sidebar.

Also, my adventure novel Doc Wilde and The Frogs of Doom is currently on sale to celebrate Valentine’s Day…