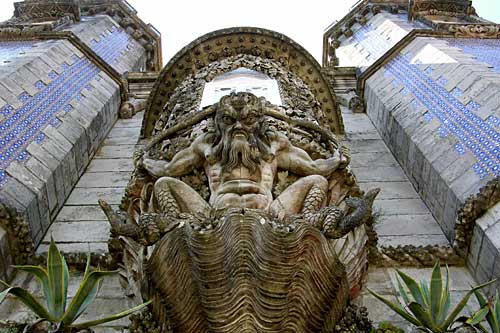 We hear a lot about how authors, and everyone else, should favor local, indie bookstores over Amazon and big chains. I love bookstores, especially cool little ones, and I even link to IndieBound on my site above Amazon, B&N, Smashwords, and other larger vendors.

Well, I recently tested the waters at the two most prominent indies in my town to see if they’d sell my book, Doc Wilde and The Frogs of Doom. (I should have done this months ago, but what with the crushing depression and electroshock therapy I just didn’t get around to it.)

The first I won’t name because I’m not looking to be personally contentious with them as they are very nice folks who run a great shop. It happens to be the very store where I debuted the novel in 2009, when I was with Putnam. I had a very successful signing with them, came in to sign books when they needed me to, and had what seemed to be a friendly relationship with the main folks there. I love this store. I showed it off to Nydia when she was visiting in the summer. I recommend it to folks all the time. I even used to link to their website from the Doc Wilde site, until I left Putnam and my book was temporarily out of print.

I walked in their door, an author who already ran the gantlet of traditional publishing, landing a multi-book contract with one of the largest publishers in the world, now carrying an improved, new, beautifully illustrated edition of my first book. A book with three pages of raves in the front from sources like Daniel Pinkwater, Kirkus Reviews, Publisher’s Weekly, and the screenwriter of Thor and X-Men First Class. A book, incidentally, with a 4.5 star rating from readers on Amazon. While I was waiting to speak to someone, I even helped a customer, selling her Terry Pratchett’s The Wee Free Men (which is awesome and hilarious).

Well, they told me (nicely, but bluntly) to take a hike.

On to the second store, the Eagle Eye Book Shop, which I name because of the friendlier reaction I got there. I asked if they’d sell my book, they said probably, but not right now, I’d have to come back in after the new year and all the Christmas craziness. The guy looked at the book, said oh yeah, he remembered this in hardback, and praised the new edition. He said they’d probably even be open to me doing a signing. I was so happy I spent nearly $40 (getting among other things Neil Gaiman’s new one and Finn by Jon Clinch, which I’ve been wanting to read for a while).

All this is very personal to me, as it directly impacts my potential income and ability to find readers. I hope to have a local store which is the main place folks can order signed copies from. I want to do what everyone is crowing we writers should do, support our local bookstores. I’ll let you know how things go at Eagle Eye, and I’ll be visiting some other places as I can. Hopefully my book will start appearing on shelves so people CAN buy it somewhere besides online vendors.

Because if bookstores want authors to support them…it kind of needs to go both ways.

I originally posted a short version of this post on Facebook and it garnered some interesting discussion, which I am attaching below (since the post and comments were posted publicly, I assume posting them here is also fine).

The image below is linked to the “Writing on  the Ether” piece, so you can click the pic to reach it (it’s definitely worth reading). 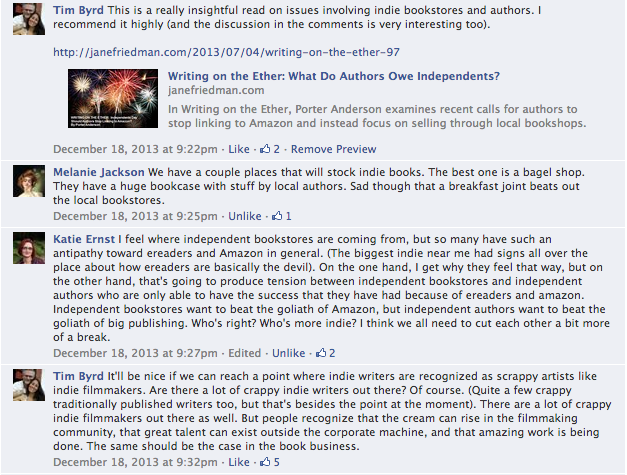 Feel free to join the discussion below….

5 comments on “I Love Bookstores. But Do They Love Me?”