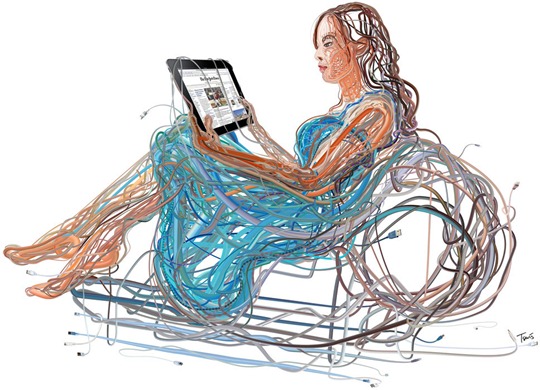 There’s a lot of grumpiness these days about books, book selling, book publishing, the “proper” format of books, Amazon’s assault on books by publishing and selling lots and lots of books, and how nobody reads books no more.

Did you know that if you’re reading my blog on a screen of some type, it’s not literature (and you’re probably a subliterate ignoramus who DOES. NOT. LOVE. BOOKS.), but if I print it out on paper it is suddenly transformed and worthwhile? Apparently that’s the case.

Yep. Lots going on. I’ve written about it a bit before (like when I posted about the “Ebook Apocalypse“), and I’m active on the battlefield as an author who used to be with one of the Big 6 publishers but has now gone entirely independent (see my “Astonishing Adventures of Doc Wilde” Kickstarter project, live until April 28th, 2012, please take a look and help a strugglin’ wordsmith out).

Are things really all that bad? Or are they just different? Could they even be better?

I saw some reports recently that indicate that the doom and gloom may be uncalled for.

For instance, take a look at this chart, swiped from a piece by Alex Madrigal over at The Atlantic:

Alex’s post is titled “The Next Time Someone Says the Internet Killed Reading Books, Show Them This Chart,” and he says:

Remember the good old days when everyone read really good books, like, maybe in the post-war years when everyone appreciated a good use of the semi-colon? Everyone’s favorite book was by Faulkner or Woolf or Roth. We were a civilized civilization. This was before the Internet and cable television, and so people had these, like, wholly different desires and attention spans. They just craved, craved, craved the erudition and cultivation of our literary kings and queens.

Well, that time never existed. Check out these stats from Gallup surveys. In 1957, not even a quarter of Americans were reading a book or novel. By 2005, that number had shot up to 47 percent. I couldn’t find a more recent number, but I think it’s fair to say that reading probably hasn’t declined to the horrific levels of the 1950s.

All this to say: our collective memory of past is astoundingly inaccurate. Not only has the number of people reading not declined precipitously, it’s actually gone up since the perceived golden age of American letters.

Then we have a February survey from the Pew Research Center, released Wednesday, that seems to indicate that the rise of gadget reading has led to a rise in reading overall. Among their findings:

21% of adult readers said they’d read an ebook in the past year (compared to 17% surveyed last December).

People who read ebooks tend to read significantly more than people who don’t.

So reading books on a screen may chafe for some folks (and I love my un-virtual books, too, with all my heart, don’t get me wrong), but don’t mistake your own discomfort with change as a symptom of the Fall of Literature and Civilization.

In fact, all this digital stuff may well be good for (almost) everybody…