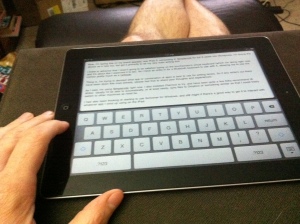 I’m working on changing my work habits as a writer, and part of that is changing tools. Over the years I’ve progressed from fountain pen and legal pad to manual typewriter to desktop PC to portable pre-laptop to laptop to notebook to netbook…

Now, I’m typing this on my brand spankin’ new iPad 2, composing in Simplenote for cut & paste into WordPress. I’m loving the device as a new toy, but got it primarily to be my new main writing tool.

I knew in advance that I wasn’t going to be satisfied typing on the touchscreen’s virtual keyboard (which I’m doing right now, and it’s about like I expected it to be). So I have an order in for a Bluetooth keyboard to use with it, allowing me to use the combo pretty much as a netbook.

Thing is, I’m trying to decide what app or combination of apps is best to use for writing books. So if any writers out there have been down this road already, please feel free to share your thoughts and experiences.

As I said, I’m using Simplenote right now. I also installed Plaintext to try, and have seen quite a few folks recommend IA Writer. Ideally I’d be able to automatically, or at least easily, sync files to Dropbox or something similar so that I could freely switch to other machines as need be. In that vein, I’m curious about DocsToGo as well.

I had also been thinking of starting to use Scrivener for Windows, and still might if there’s a good way to get it to interact with whatever app I wind up using on the iPad.

Again, if you have any experience with this stuff, please share.

4 comments on “Looking For Advice: Writing On The Ipad”