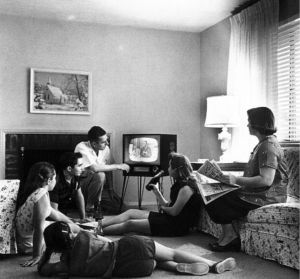 An excellent article on “The Big Money,” which is an offshoot of Slate, breaks down the fruitlessness of trying to boost the numbers of people watching a show as it’s televised if those people are not in the microscopic subset of watchers with Nielsen boxes:

Trying to convince more people to watch a struggling show on TV is entirely useless. The television industry is not a democracy; the only votes that count—scratch that, the only people allowed to vote at all—are the 12,000 to 37,000 households that have Nielsen boxes sitting above their TVs. Nielsen boxes are poll stations for the Nielsen company—the organization that reports all of the ratings for the television industry. If Nielsen doesn’t know you exist, then neither do the TV networks. And if the TV networks don’t know you exist, then tuning in to an endangered show is a waste of everyone’s time. If a show is turned on and Nielsen isn’t there to hear it, it most definitely does not make a sound…

…But the country has only somewhere between 12,000 and 37,000 homes reporting back with data. Compare that with the more than 112 million television-equipped households in this country. Now, even if we assume that these Nielsen readings are accurate—and there are many who believe that’s not the case—the huge gap between 12,000 and 112 million means almost everyone is stripped of an actual voice in the process….The “save our show” campaigns are ill-advised because they fail to take into account this all-important gap between the sample size and the size of the sampled audience.

The way to bypass this shitty system is to watch the episodes of your beloved show online:

You can also record the show on your DVR, then watch it within three days. If you do that, it gets counted. If you just watch the show live through that same DVR, you don’t count. Let me say that again, lest you missed it: if you’re watching your favorite show live, your viewing does not count. Unless you’re a Nielsen household.

So if you want to help Dollhouse stay on the air, or The Sarah Connor Chronicles or Chuck or Gene Simmons’s Family Jewels (gods forbid), do your part by either recording your show on DVR and watching it soon after, or by watching (and even rewatching) episodes online.

And, I point out to you again, the last several episodes of Dollhouse are available to watch free, right this minute, on www.hulu.com. Get thee hence.