For those who don’t know me, or have known me but don’t have great memory, or those who know me but are in denial, my name is Tim Byrd, and I’m a writer and a dad.

That is not in order of importance.

Anyway, I’ve blogged a bit in the past [NOTE: on 3/11/09, I imported the earlier blog and those entries are now available as part of this blog], and as part of a personal campaign to re-engage the world, plug my work, and make new friends, I’m blogging again. I’m also on Facebook, MySpace, and maybe shaking a tin cup outside your local Starbucks (I probably need a shave). 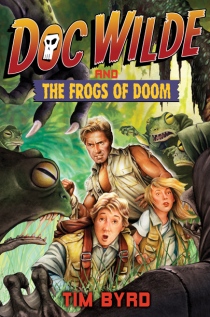 Next year, G.P. Putnam’s Sons is going to publish my first novel, Doc Wilde and The Frogs of Doom. The book is the first of a series depicting the adventures of Doctor Spartacus Wilde, super-scientist, gadgeteer, physical exemplar, warrior, and the coolest dad in the world except for me.

Doc has two brilliantly capable kids, Brian and Wren, who join him for his perilous travels, often saving the day (and the planet) themselves.

Anyone who enjoys grand old pulp adventure in the Doc Savage/Indiana Jones/The Shadow style should enjoy Doc Wilde. It’s written for young readers, but full of literary allusion and other stuff for smart folks of all ages.